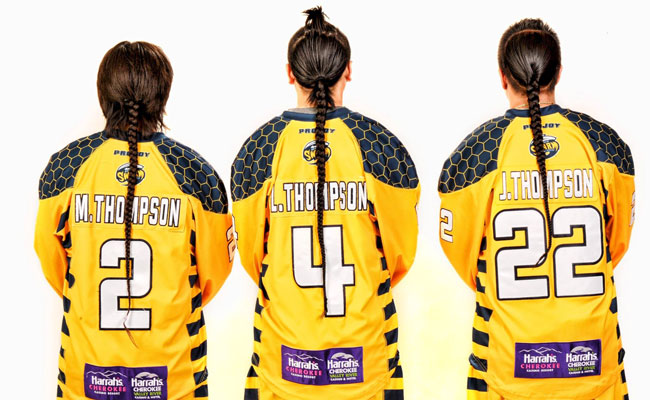 (Thursday, Sept. 22) – The Georgia Swarm today announced that the team has re-signed forwards Miles Thompson (3 years) and Jerome Thompson (2 years). Georgia currently has three of the four Thompson Brothers on its roster, as the youngest brother, Lyle, was selected No. 1 overall last season.

Miles, 25, will enter his third season with the Swarm in 2017 and has totaled 98 points (46G, 52A) and 125 loose balls thus far in the NLL. Georgia acquired the University at Albany graduate with the No. 3 overall selection in the 2014 NLL Draft after Thompson tied an NCAA Division-I record for most goals in a single season (82). During his rookie season in 2015, Thompson was named to the All-Rookie team after ranking second on the Swarm with 62 points (27G, 35A).

“Miles is a pure goal scorer and has brought positive energy to our organization since he joined our team two years ago,” Swarm Owner and General Manager John Arlotta said. “We know Miles is working extremely hard this offseason to take his game to another level in 2017, and we’re excited to see him continue to grow both on and off the field in a Swarm uniform.”

Jerome, 28, posted 24 points (10G, 14A) and collected 35 loose balls during his rookie campaign with Buffalo in 2015. As a rookie, Thompson tallied a career-high four goals against the Swarm when the Bandits won at home on Jan. 30, 15-12. Georgia acquired the 5-foot-11, 195-pound lefty forward in a trade with Buffalo this past March after Thompson posted five assists in two games with the Bandits in 2016.

“We were fortunate enough to acquire Jerome late in the season last year,” Arlotta said. “Left-handed forwards are always in high-demand in the NLL and Jerome has proven that he can both score and dish the ball at a high level.”