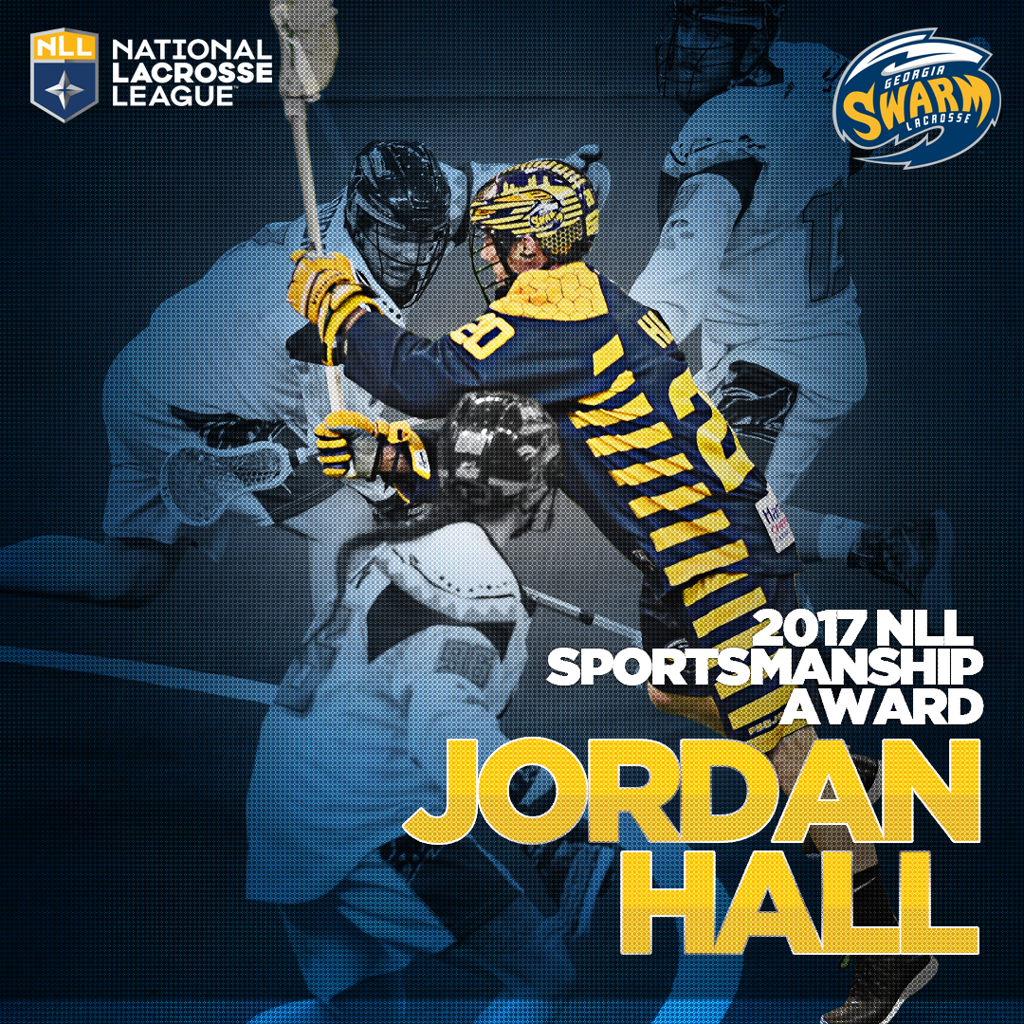 “Just to be honored among the Swarm team for anything and league-wide is just a big honor,” Hall said. “… I like to think I play hard but I’m not taking liberties out there. It’s nice to be honored individually but also have the team win something a little bit bigger than that (Champion’s Cup).”

Hall’s first year with Georgia saw him finish the season with 80 points (20G, 60A) in the regular season, one point shy of his career high. His 60 assists were second on the team, behind MVP candidate Lyle Thompson and his 71 assists. In the postseason, the 32-year-old finished with 18 points (12G, 6A) and an insane .571 SPCT. His 12 goals in four games led the team.

In Game 1 of the Champion’s Cup, Hall exploded for eight points (5G, 3A) against the two-time defending champion Saskatchewan Rush, leading Georgia to an 18-14 win.

“The sportsmanship award is always a combination of someone who plays the game right but is also an excellent player,” head coach Ed Comeau said. “For a guy that plays as hard as Jordan does, does so many great things, plays the game with respect, treats others with respect, and ends up with 80 points, that’s huge for Jordan. Going forward, that’s really a great role model for something like the sportsmanship award. What he does on the floor and how he plays, we like to say he plays the game the right way. He plays hard and he plays fair and he plays intense and still is able to excel at the game by doing it the right way.”

Hall regularly received praise throughout the season for his veteran presence and unselfish offense, with teammate Mike Poulin calling him “the acquisition of the year” after Hall’s dominant performance in Game 1 of the Champion’s Cup.

“What he brought to the team, you can’t quantify,” Poulin said. “For him to be recognized for being such a stand-up guy, it’s a character award, it means a lot I’m sure to him but also the organization.”

The Surrey, British Columbia native has spent 10 years in the NLL, recording 616 points (205G, 411A) in 153 games. Georgia’s Champion’s Cup victory in 2017 marks the second time in his career Hall has been a part of a championship team.

Kyle Buchanan (New England) and Dan McRae (Calgary) were also up for the sportsmanship award.